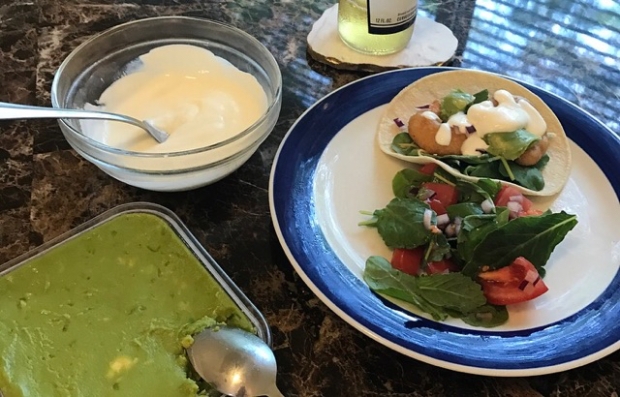 I have always been a pretty picky eater and over the years what I like and dislike have changed, for instance there were a sold 9 years where I only ate my grandmother’s homemade or one brand of frozen pizza because I didn’t like how the other sauces tasted with the crusts. I have since gotten over that and will eat all pizzas (well except for ones with toppings I don’t like).  As I have gotten older my tastes are changing, thank god because pizza is amazing. Now I’m making it a goal to try and eat new foods!To accomplish my goal I am sharing recipes and having fun with nutrition and food. It will likely be a frequent post on the blog but with a variety of new foods and dishes (So, I hope you like them).

I keep seeing recipes with shrimp and this week I found one that looked to good not to try, beer battered shrimp tacos! While its not the healthiest recipe I figured the shrimp would have their best bet if I paired them with the taste of a favorite recipe my mom used to make.

I got the original recipe from Buzzfeed’s Tasty, but I made some modifications based on what I like, what I had for ingredients, and cost (I am trying to stick to a budget). First off I already had lime juice so I forgot to buy limes for the zest, while it isn’t a huge deal it would have made the sauce look even better. Next I skipped the cabbage salad because I’ve never had cabbage and I’m only looking to try one thing at a time. Next I was almost out of white flour so I mixed white and whole wheat flours. Lastly I don’t have a kitchen thermometer so I kind of guess on that. Below is the recipes as I made it.

The recipe was easy to make and with the exception of having to fry in small batches it went quickly no more than 40 minutes for the whole thing! I worked on this Sunday afternoon and used it as an early dinner to taste test. I was even impressed with how easy clean up was. As I’ve shared I’m not a fan of doing the dishes I think it only made like 14 things to clean, most of which were utensils which take no time at all to clean up because most can be put in the dish washer! 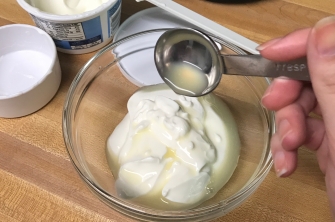 10 oz beer (2 notes: 1-the original recipe called for a cup but with only a cup mine was very doughy so I added extra beer 2- I don’t really like beer outside of this recipe so I just went with corona because is Mexican and so are tacos, but I assume you could use any brand/type)

According to my packaging a serving was roughly 6 shrimp in 2 tortillas. So this recipe made quiet a few servings. I saved 1/2 the leftovers to eat this week for dinners and the other 1/2 I froze to eat some other time. I’ll heat the shrimp in my toaster oven before making more tacos.  I served mine with a small salad of mixed greens with diced tomatoes and read onion topped with some of the cream sauce. It was delicious and let me get in a few extra greens to balance the fried shrimp.

That being said you might have guessed I didn’t hate the shrimp tacos! In fact they were pretty good.  While they aren’t yet a new favorite I wouldn’t say no to trying them in other recipes. The texture was new and I think with my leftovers I will get used to it and be more adjusted to it. I might not make shrimp a weekly routine but I also won’t run and hide if ever serve them. Well, as long as its cooked I’m not ready to start trying raw seafood. If you like shrimp or are interested in trying them I would absolutely suggest this recipe. If you aren’t into shrimp you could easily substitute chicken and have and equally delicious meal.  Below is a word document of my recipe that you can print and use to try your self! Let me know what you think!