Over the summer when I was sweating to death I fought it by thinking about fall.  I did my best to beat the heat with inspirational fall photos on tumblr and pinterest. While scrolling through pinterest I saw a recipe for apple butter and have wanted to make it since. Unfortunately all the recipes I saw were for a crock pot which I don’t have.  I had mentioned this to mu mom and she said I could just buy one and throw some apples, sugar, and spices together and let it cook. I don’t really have the money to spend on an appliance for one recipes so I took some of my freshly picked apples and  tried to make it with what I had. 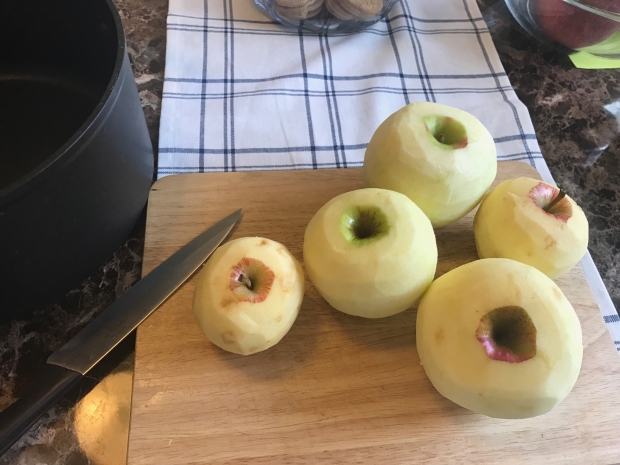 I probably should have been studying but its fine now I will have something yummy to put on the pumpkin banana muffins I made for breakfast this week! Or maybe just eat it out of the jar because it turned out really good. I wrote out how I did it with descriptions of the steps and how the mixture looks at each step to help you know what to look for while making it but at the end I uploaded a document with more simplified instructions and a list of ingredients.

So I’m not great at measuring ingredients, I tend to add until it looks or smells good, so I will estimate them.  I took about 2.5 pounds of apples peeled and chopped them and then tossed them into a large pot. I chose a pot that would fit most of the apples so they were touching the bottom of the pot. Then I added about a 1/4 cup of  brown sugar( and a little extra later), a teaspoon of cinnamon, a teaspoons of vanilla ( I added a second teaspoon of vanilla about 1/2 way through too) and a 1/8 of a teaspoon of nutmeg. 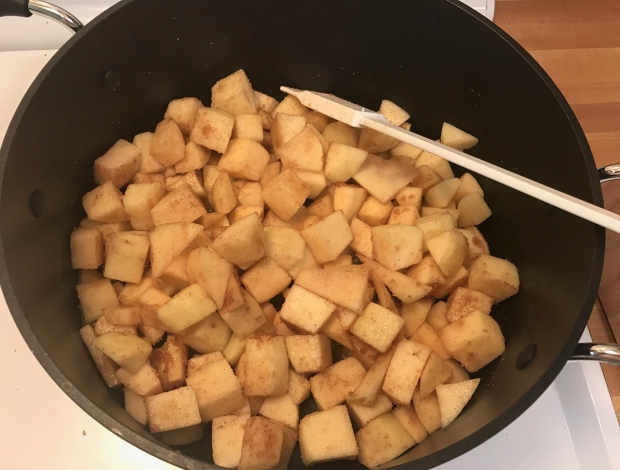 Then I mixed this all together until the apples had a brownish color from the brow spices.  I covered the pot with the lid and started with the heat on medium low for about 15-20 minutes. At this point the apples had gotten a soupy sauce around them and the smaller apples that were sitting in the liquid were starting to appear cooked. I stirred the apples and moved the cooked apples up and the uncooked apples into the liquid. 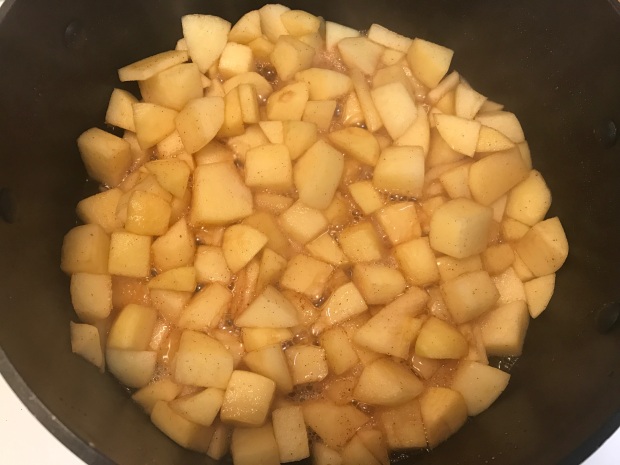 I turned down the heat to low and replaced the cover and allowed the apples to cook for about another 20 minutes before I checked them again. At this point the sauce had mostly cooked of an most of the apples still weren’t cooked through so I add in an additional teaspoon  of vanilla and about a table spoon of brown sugar to the apple and mixed hopping to revive the sauciness. At this point so of the well cooked apples started to easily mash with stirring.   I recovered the pot and left the apples on the burner. About 5 minutes later I checked to see if the vanilla and brown sugar helped to replace the liquid and they did but not to the same degree as it had the first time.

About 15 minutes later I checked on the apples and the liquid was again gone but more of the apple appeared cooked and were easily becoming mashed with stirring at this point a started to spread the apple mixture evenly across the bottom of the pan to keep the apple chunks as close to the heat source as I could. I recovered the pan and allowed it to keep cooking. 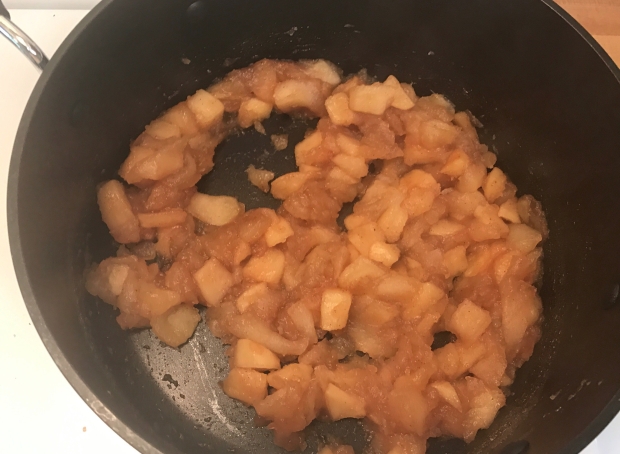 After another 20 minutes of cooking the majority of the apples had been mashed and were starting to resemble the consistency of apple butter. However there were still a few larger chunks of apple that remained so I took my potato masher and used it to mash those apples. I  then spread the mixture over the bottom of the pot and allowed it to continue cooking. After about 10 minutes I stirred the mixture again and then smoothed the mixture along the bottom of the pot. After 10 more minutes the mixture had the appearance of apple butter and after a taste test it tasted amazing so I decided it was done. 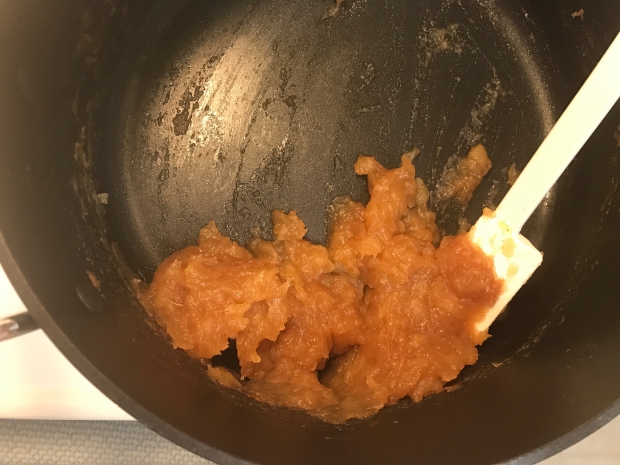 I removed it form the heat and let it cool for a few minutes before transferring it to an empty jar I had to store it in the fridge. I made just under 2 cups worth of butter and it should keep fine for about a week in the fridge but there is a chance mine won’t last that long! 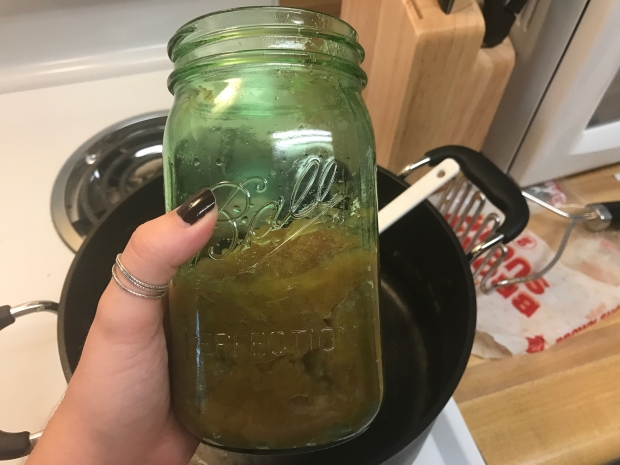 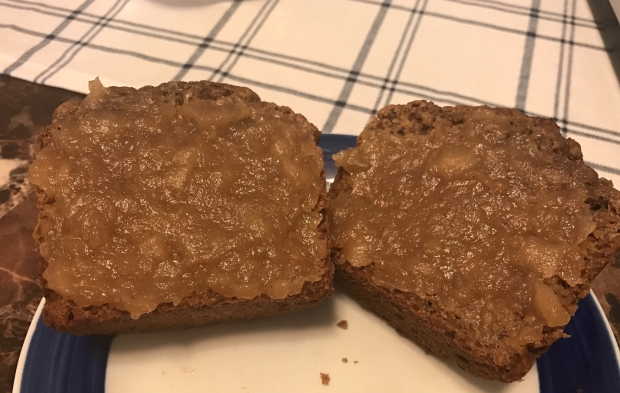 For breakfast I enjoyed my apple butter on a giant pumpkin banana muffin I had made and it was a perfect complement to the muffin. I also spread some on rice cakes with chia seeds sprinkled on top and it made a excellent fall flavored snack! This butter can be added to breads, baked goods, pancakes and probably a bunch of other thinks I can’t think of. Let me know what you think, if you try the recipe, or if you have any tips for what I should try it on next!